Well, guess what folks.... my longest standing unfinished project is
D-O-N-E! DONE! Yes, it is TRUE.. the Turtleneck Shrug Scarf is FINISHED... 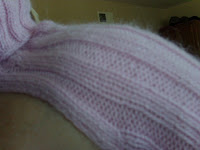 Perfect, it is not. And really, when would a person ever really wear one? As I tried it on, I think.. humm.. I should make a tank top of the same yarn to go with it... nah! I think I just might chalk it up to a lesson learned. Sometimes knitted items just don't turn out as expected.. that doesn't mean we need to keep it, or try and make it better.

Here are some up close photos... no distant photos because again, it really doesn't make sense... 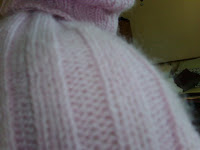 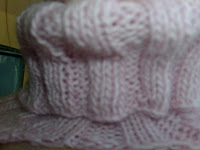 Maybe if I wore it as a scarf? Nope, don't that that works either... now I am contemplating ripping it and reusing the yarn.. except that it doesn't rip well because the fibers are too fluffy... It might just end up as a puppet... or I am thinking about felting it, it might work better for Nicole... I will let you know what I end up doing.. in the meanwhile, FO folks FO! ;-)Liz
Posted by Lizzy at 1:39 PM

In Northern California -- Novato, Santa Rosa, and Oakland -- knit, spin, dye, and grumble chat about what we have to endure to get to our Knit Night Friday.

I Love This Magazine 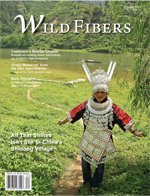 Fiber Festivals We Want to Visit